Believing Your Own Hype: The Dunning-Kruger Effect 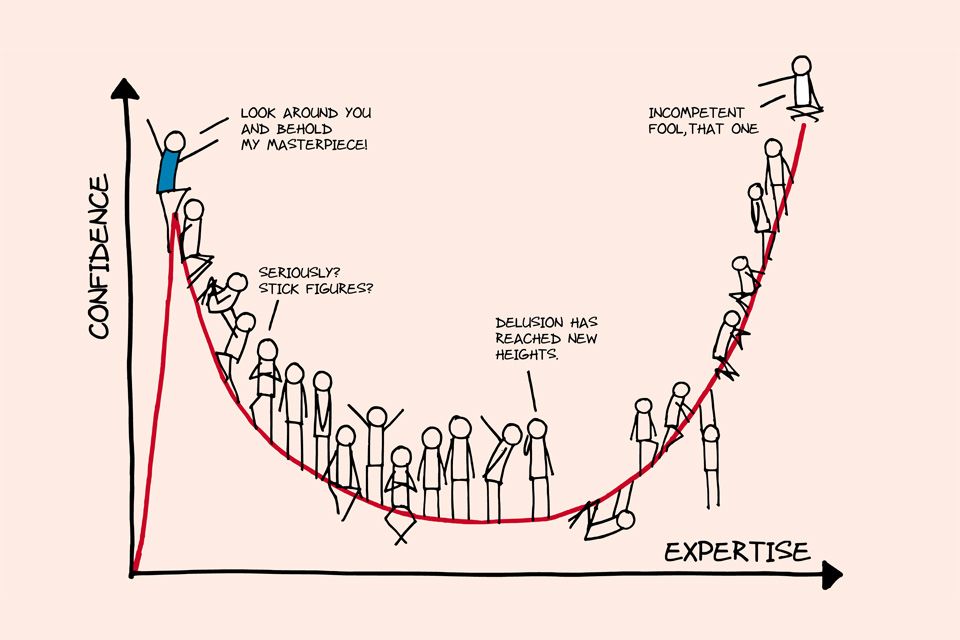 Have you ever spoken to someone who, upon learning of your occupation, proceeds to incorrectly advise you on how to do your job? Or a manager at work who acts like an expert in their field even though they have little or no understanding? If you have answered yes to either or both of these questions, we would like to introduce you to the Dunning-Kruger Effect.

Developed in 1999 by psychologists David Dunning and Justin Kruger, the Dunning-Kruger Effect is a cognitive bias whereby people who are incompetent at something are unable to recognise their own incompetence. And not only do they fail to recognise their incompetence, but they’re also likely to feel confident that they actually are competent.

There are plenty of studies that go into real-life implications of this effect. We have picked out a few that we liked from forbes.com below:

So how can this effect be countered? We have listed some ideas below:

It would be a bit wild to think that everyone except us struggles with the Dunning-Kruger Effect. That would be highly unrealistic. There have likely been a few times where we have given out advice without knowing much about a subject. We are only human after all. Therefore, any change that we wish to see in others should start within ourselves (so deep bro). Acknowledging our own shortcomings may help others to develop the self-awareness to acknowledge their own shortcomings too. It’s for the best. Can you imagine a world where everyone thought they were amazing all the time even when they aren’t? Sounds like your typical Big-4 department, terrifying.

If you work with a team member who is displaying the Dunning-Kruger Effect, you should let them know as soon as possible. It may be a difficult conversation but in reality, it is the best way to help someone who has a skewed understanding of their job performance. When providing feedback, it would make sense to refer to specific examples so that the person can really understand where they went wrong. It is also important to remember that we have likely been in a similar position before, so as per point one, be humble. If the feedback can be delivered with these concepts in mind then hopefully a lasting change can be made.

Although we may have an understanding the Dunning-Kruger Effect, we should be aware that it can be incorrectly assigned. An example of this is when we are unhappy with a senior colleague at work. It can be difficult to have an honest conversation due to their seniority and this can lead us to make harsh judgements based on the Dunning-Kruger Effect e.g. ‘He has no idea what he is talking about, he is delusional’. In reality, though, is this really the case or do you just find that person annoying? It is easier said than done but if you are able to be introspective about how you feel then you may find out that their behaviour is not related to the Dunning-Kruger Effect at all. They may just be a jerk instead (ha) and this would require a different approach.

So there it is – from time to time, we think that we are better than we really are. No surprises there. The important bit is learning how to use this information to create a better working environment for you and your colleagues.

If your work environment is still rubbish, however, try our fantastic job search.

Until next time,
Nathan

Sign up to try our new job search, it's really good, skills > titles.